US Distributor: Eleven Arts
Production Studio: Kyoto Animation
Was this provided by the publisher? No
More Info: Anime Planet 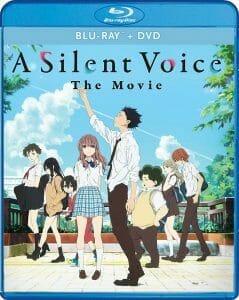 I tend to be pretty on the ball when it comes to realizing when I am watching something truly special. When analyzing anime films and TV shows, though, I tend to play the waiting game,, as it’s only after a few views that a piece can really come together for me. So, when I first heard about A Silent Voice, I was interested. Unfortunately, I couldn’t make the theatrical run, as I live too far out of a major city to go see it. Still, it remained on my ‘to-watch’ list from that point on. And yet, upon watching A Silent Voice, I found it to be a pleasant surprise.

The film focuses on Shoya Ishida, who led a rather typical life in elementary school. Normal, that is, until he hit the sixth grade. It was in this year that a new student named Shōko Nishimiya joined the class. Shōko was a sweet and demure girl, who had soft, pink hair, and happened to be deaf. To help her in her day, the girl used a notebook to communicate with adults and her fellow students. Shoya, being a typical bratty kid, chose not to accept her. Instead, he joined in with his fellow classmates to bully the girl, despite her attempts to fit in with everybody else.

Several years later, Shoya finds himself in high school, contemplating suicide in light of his past actions. Before he can end it all, though, he ends up running into Shōko. Their chance meeting causes Shoya to change his mind, as he  seeks to make things right once and for all.

At its core, A Silent Voice is a tale of redemption and reconciliation, even if that road involves a lot of soul searching and coming to terms with what you’ve done.  And, for the most part, it dives into this idea headfirst. To put it lightly, the first thirty minutes, which flash back to Shoya’s sixth grade life, are uncomfortable. To be fully honest, I had to turn away more than a few times. One could try to excuse their abuse as kids being kids, who perhaps weren’t used to dealing with disabled people Just know that you’d be fighting a losing battle, as there’s no excuse for their actions.

At the same time, the teachers, faculty, and other adult authorities did nothing to step in until the kids’ abuse reached an ultimate breaking point. I couldn’t help but wonder, as an American, how they could just allow this to slide. Not that I was bullied (at least not to the extreme of Shōko) in my youth. Most of my own experiences boiled down to being called “Four-Eyes,” or picked on for my more nerdy/dorky disposition.  That said, I have heard of, and at times served as an indirect witness to  acts near the level of what Shōko endured. To be honest, the character whom I identified with most was Miyoko Sahara: the one girl in the class who managed to reach out and make friends with Shōko, only to be shunned for it. Their reunion scene later in the movie, after all those years, was simply heartwarming.

That said,  A Silent Voice touches upon genuinely heavy subject matter, with bullying being the main topic, and treats it with a measure of dignity and respect. The film isn’t afraid to directly confront these issues and examine the roots of said problems. While it’s easy to conclude that problems like bullying tend to be caused by individuals, the picture posits that society at large also holds a large share of the blame. Thus, Shoya confronts his own youthful flaws, while trying to make it up to Shōko. That road is never easy, though, as several of his former friends either haven’t changed, or reacted the wrong way in response to the abuse. Redemption is never easy to come by, and yet by the end it is worth all the effort in the end.

On a visual level, Kyoto Animation achieve an amazing job with A Silent Voice. Given the more realistic nature of the story, one would expect a more mundane visual presentation. Instead, director Naoko Yamada and her production team create a rich and vibrant world in a near present Japan, making the mundane magical (a trait shared among several KyoAni productions ala Love, Chunibyo, and Other Delusions!, Hyouka, etc.). Seriously, there were many scenes that just floored me, and I am already a big fan of KyoAni’s TV anime productions.

NYAV Post handled the English dub for A Silent Voice , which was nothing short of stellar.  The casting brought in heavyweights like Robbie Daymond (Shoya) and Kira Buckland (Naoya), who  gave their all to deliver a ‘naturalistic’ feel in their performance. That said, I have to give my biggest props to Lexi Cowden, who plays Shoko in the adaptation. Lexi, like her character, is deaf. And though she only has a few lines throughout the film, she carries them with a poignancy and power that is rarely heard in English dubs nowadays.

A critic once famously asked why films (and media in general) go out of their way to redeem despicable people. To that person, I’d like to point to this film, and say that people need to learn that nobody is irredeemable, given the proper circumstances. Whether they take that opportunity or not is up to the individual, but we all have a personal responsibility to become the very best people that we can be. As such, A Silent Voice is a wonderful film that I’d recommend wholeheartedly to almost anybody.