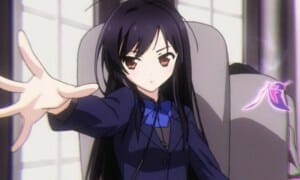 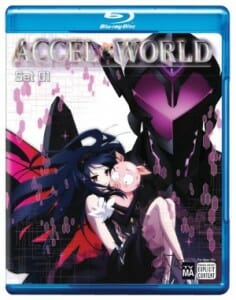 Haruyuki “Haru” Arita is teenager with low self-esteem due to being bullied by his classmates for being short and overweight. During a game of online squash, Haru meets Kuroyukihime, the vice president of his school’s Student Council. She introduces Haru to a game called “Brain Burst”: a Virtual Reality MMO which allows the players (known as Burst Linkers) to fight each other. The prize for victory is awarded in the form of burst points, which can be spent to use the game’s acceleration powers in the real world. Before he knows it, Haru finds himself enlisted by Kuroyukihime, tasked with aiding her reach level 10 within the game, with the ultimate goal of meeting the creator of Brain Burst to learn its true purpose. To do so, though, they’ll need to surpass deadly trials, which include defeating the greatest gamers to play the game, known only as the “Six Kings of Pure Color.”

The basic premise of Accel World might be standard anime fare, but the show really rises above its peers with its strong telling of the story and development of the main cast. Set 1, which covers the first twelve episodes, starts slowly, as the first few episodes are heavy on exposition. As a result, they can be a drag to watch. While the heavy exposition does continue through the set, the world building gets much smoother, and important aspects of the game are introduced naturally and when needed.

One of the most interesting parts of the story rests in how the characters get their avatars for Brain Burst. Unlike standard MMOs, or other games that allow player customization, the player’s avatar is created from the subconscious of the player. This blurs the line between both the virtual world and the real world, as the characters’ avatars express the desires and wills of their users. 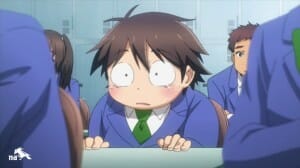 The writing also really shines when highlighting how some players use the game to gain an edge in real life. As previously mentioned, the prize for victory in Brain Burst comes in the form of points that can be used in real life. The show does a fantastic job of showing how some players use the game to gain an edge in reality, much like how athletes use steroids or other performance-enhancing drugs. Some of the players of Brain Burst become addicted to playing the game to such an extent that they worry about losing all of the Burst points and thus having the game uninstalled, similar to those addicted to drugs or alcohol. The show also demonstrates how playing the game changes the player, though not always for the better. Cherry Rook, a friend one of the early antagonists of the series, changes for the worse after playing the game for a long time, to the point that she becomes a different person than she even remembers.

The development of the cast over the course of the series, even in the first half, is well written and done in such a way that feels natural. Haru starts off having low self-esteem and he’s whiny to the point of being annoying. As the episodes progress in the first half of the series, though, he becomes more confident in himself. Kuroyukihime might give off the aura of being a “Mary Sue” type character, given that she can solve any problem, but Mary Sue she is not. She shows guilt and regret over past actions and, like any other person, shows fear. The relationship between both Haru and Kuroyukihime is well done, and shows that they both need each other to not only supplement their flaws but also help each other reach their perspective goals. 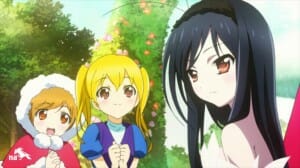 Accel World is a Sunrise-produced series and the amount of detail given to this shows immensely. Background art is highly detailed in both the real world settings and during Brain Burst matches. It is not to the same detail level as a theatrical anime release, but it does look gorgeous. Possibly the most breathtaking of these backgrounds comes about during the Chrome Disaster arc, in which the series spends a lot of time in the Unlimited Acceleration Field. To be blunt: this arc offers some of the best art the show has to offer. Character designs are strong as well, with Haru being the most distinguishable of them all. Haru is drawn in an almost “chibi” manner, being shorter than the other characters and being very overweight. The fight scenes are well animated and are enjoyable to watch.

Accel World also boasts a strong soundtrack. The first opening, “Chase the World” by May’n, a fast-paced rock song,  is especially strong as is the first closing “unfinished” by KOTOKO (featuring Fripside). Extras included with Viz’s release of Accel World Set 1 include character art gallery, clean Opening and Ending sequences, the Viz trailer for Accel World, and trailers for other Viz titles.

While the first few episodes of Accel World start off slow, those that can slog through them will be presented a  series that does a great job of not only introducing the world of Brain Burst, but also building a cast of charming, well-written characters. Some may be hesitant to check out the series due to its pedigree (it’s written by Sword Art Online creator Reki Kawahara), but such a legacy shouldn’t deter viewers from enjoying what this series has to offer.