Baka and Test: Summon The Beasts 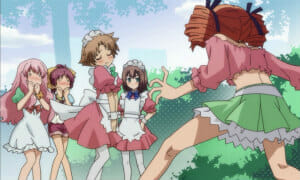 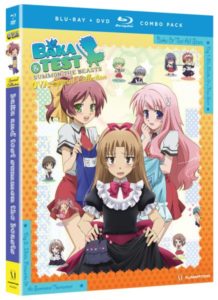 At the prestigious Fumizuki Academy, students get a very unusual lesson in the ways of the world. Students are divided by their test scores into Classes A through F. The top-performing pupils are placed into Class A, the finest of luxuries are showered upon them. Shiny new equipment, cushy seats, even an in-class snack bar await those who can reach its lofty heights. On the flip side, class F works in the depths of poverty. Class F can only wish for chairs and desks, as they work with cheap mats and low tables. In this school, students can summon avatars, adorable little fighters that the students can use to wage battles between the classes. The stakes are high in these fights,  as the victor can claim his opponent’s equipment for his own class. Akihisa Yoshii and his fellow idiots in Class F are tired of working under the boot of, well, every other class at the academy. Led by Akihisa Yoshii, the class schemes to beat the odds and use their avatars to win a Summoner Test War against Class A.

Despite its unique premise, Baka and Test still treads a lot of ground that will be familiar to fans of high school “boy meets girl” comedies. What makes the series particularly special, though, is how it takes these cliché concepts and turns them up to eleven. It asks questions like “what would happen if nose bleeds actually caused significant blood loss,” or  “what if your sister actually did try to court you, and what if having a yandere girlfriend wasn’t something special?”

Baka & Test walks a fine line, as it amps its characters and scenarios just enough to make them stand out without going completely over the top, or challenging the ideas behind its gags.

A nose bleed never kills anybody, nobody develops feelings for their sister, and no one thinks to call the cops on the yandere. 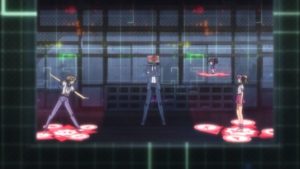 If the jokes aren’t reveling in some of the genre’s more crude traditions like panty shots and bouncing breasts, then they’re referencing other anime. This comes to a head in episode eight, which is essentially one big homage to Neon Genesis Evangelion. Even if everyone isn’t in on the joke, though, the scenarios and character reactions are silly enough to be funny on their own. While the comedy does go blue at points, it never goes too far that for the typical teen audience. Baka & Test doesn’t aim to offend. It just tries to be really silly. I have to admit that it succeeded in getting me to laugh at Class F’s crazy antics.

The humor is delivered at a rapid-fire pace, with someone always preparing the next gag set-up or punchline. The visuals reflect this fast pacing, as they change color schemes at the drop of the hat. Oversaturated pastels and bright colors  quickly give way to sharp shadowy high-contrast stills. When combined with the dotted backgrounds, which mimic the coloring of a comic, the series achieves a distinctive art style to match its unique premise. 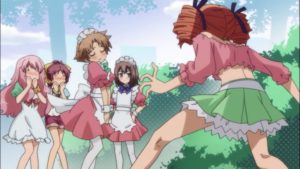 Sometimes, though, the gags are reined in by serious moments, which usually consist of a female character’s musing on their unrequited love for main character Akihisa. These attempts at developing the cast beyond their 2D archetypes prove to be insignificant at best, at and annoying at worst.

For some, the brief romance segments coupled with the suspension of disbelief required for the avatar system might douse some of the show’s impact. That said, though, if you don’t mind a comedy packed with wacky high school hijinks and copious anime references, you should get a kick out of Baka & Test.