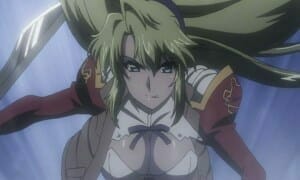 The bombastic, busty action title returns for one more round! 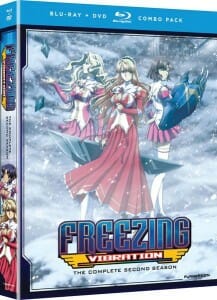 Are you a fan of Freezing? Did you sit, staring at the final credits hoping for more plot and more “plot”? Well, you’re in luck! Strap yourself in, because it’s going to get bouncy as we dive face-first into Freezing Vibration!

The season kicks off with a bang, as leading lady Satellizer El Bridget skydives from a helicopter dropship into the snowy wastelands with her limiter Kazuya Aoi. Their mission is simple: to destroy the Nova that lays in wait. Little does the duo know, though, that the battle ahead is only the beginning of the dangers that they will face.

Freezing Vibration revolves around the the E-Pandora (Evolution Pandora) Project, a mysterious project that aims to genetically modify normal girls, so that they’re able to undergo the Stigmata transplant to become Pandoras. Ultimately, these girls would be expected to go on to fight alongside the natural Pandora troops in the battle against the Nova. 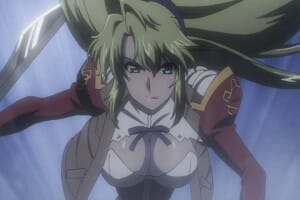 A sinister current runs beneath the research, though. How is the project moving forward so smoothly? Why is everything veiled in secrecy? Who’s really pulling the strings? It’s this layer of intrigue that really sets the season apart, as it opens the plot to a number of darker developments that question the very essence of humanity. Who pays for the advancement of knowledge? Should there be boundaries that mankind doesn’t cross? What does “loyalty” really mean, and what ideals should a person hold himself/herself to?

The original Freezing was a generally more light-hearted series, which focused on the West Genetics Battle Carnival, and introduced the core cast to the viewer. Freezing Vibration, free of the introductory baggage, is able to deliver a more focused, and ultimately more satisfying storyline. In particular, the characters of Elizabeth Mably and Satellizer El Bridget are given central roles through the series, in addition numerous opportunities for real growth as characters. 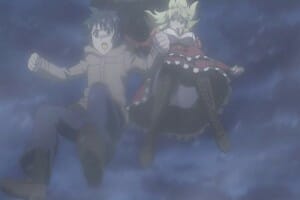 Trigger Warning: This season explores exactly why Bridget is the “untouchable queen,” the icy Pandora who cripples those who lay so much as a finger on her. We won’t go into details, but the litany of abuses she endures, physical and otherwise, offer a real motivation for her personality and her aversion to being touched. It offers a real layer of depth to the character, and makes her a far more sympathetic heroine, had they omitted the content.

The series wraps up in a satisfying, if not original climax, which offers more insight into the central cast members, as well as the mysterious Nova. While much of Freezing Vibration’s ending covers well-traveled ground, it’s delivered in a way that makes the concepts feel fresh.The major plot threads are cleaned up, and just enough remains unsolved to provide a tantalizing sequel hook.

Freezing Vibration continues excel at what its predecessor did best: boobs,babes, battles, and big-time drama. While the last element seems out-of-place, the series has mastered the art of blending its core concepts together to create a truly enjoyable experience. It’s a must for anybody who feels that battles for justice are best fought when you’re half-naked.