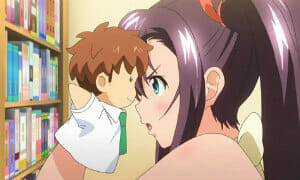 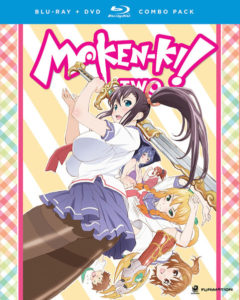 Takeru and his Leadership Committee comrades are Tenbei Academy’s last line of defense when it comes to ridding the school of mischievous Maken users.  Saving all these succulent student bodies from a horde of hocus-pocus hornballs is no easy trick, though. To make things worse, there’s a pervy creeper pinning bras to the bulletin board, a magical feline turning coed cuties into irresistible sex kittens, and a must-see manga fest where the costumes get mysteriously shrunken down to scandalous sizes! Through it all, though, Takeru knows what to do.  He keeps his mind on the mammaries – and the mammaries on his mind – as the luscious ladies of the Leadership Committee prove that their magic is breast in class!

The first season of Maken-Ki! was not a great show.  It relied too much on clichéd staples of the romantic comedy and ecchi genres which brought down what could have been a potentially good story.  The series was popular enough to warrant a sequel, but does this follow-up improve on what the first season was able to accomplish?

To put it simply, no. 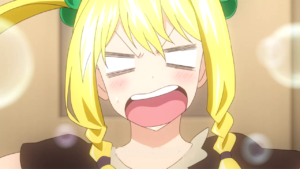 While the first season adapted the first four volumes of Hiromitsu Takeda’s original manga, Maken-Ki! Two opted to stray from the source material with anime original stories.  Unfortunately, the ten episodes of Maken-Ki! Two still suffer from the same issue that plagued the first season.  The stories presented have simply been done better by other shows.  This is especially true for the second episode, which contains a story about Haruko suffering from amnesia after an attack, only to falls back on the cliché of Haruko informing Takeru that she will have to marry him since he saw her naked.  The fact that each episode is self-contained does allow for more focus to be placed on different characters, which is the one of the few positive things that can be said about the overall plot. Sadly, the increased focus doesn’t mean much as, like the first season, actual character development is nonexistent.

Similar to the first season, Maken-Ki! Two can be fun to watch when it wants to be.  Episode four, for example, revolves around a magna festival at Tenbei Academy.  The episode features a numerous allusions to other anime shows and video games, and is especially enjoyable to watch. 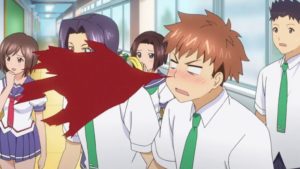 For Maken-Ki! Two, the production committee shifted production to Xebec from AIC.  Naturally, the change wasn’t without its positives and negatives.  The background art was possibly the biggest casualty in the transition, as it lacks a number of finer details present in the original Maken-Ki!.

The character designs also took a notable step down this time around.  The first season’s character designs were done by Nobuteru Yuki, best known for his work on shows like Vision of Escaflowne and Kids on the Slope. Maken-Ki! Two saw Akio Takami take the helm.  Takami, whose resume includes shows like Upotte and Ladies Versus Butlers!, gave the female cast members, a more voluptuous look, similar to those found in his other notable projects.  The rest of the cast also went through alterations, taking on a softer overall appearance. 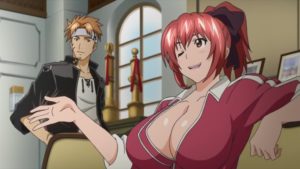 One of the biggest, brightest (pinkest or whitest) spots in the production comes from its fanservice. New director Hiraku Kaneko, who directed other fanservice heavy titles such as Manyū Hiken-chō, and Valkyrie Drive Mermaid, let his expertise really shine in Maken-Ki! Two.  The level of fanservice is higher in this season, and unlike the previous season, it is not much of a detriment to the overall product.  Camera shots are often done to emphasize the heavy fanservice often having panty shots taking a large portion of the screen.

Is Maken-Ki! Two worth watching?  That really depends on what aspects of the first season you enjoyed.  If you wanted to see the first season’s story continue, then you can safely avoid this anime original sequel.  If you enjoyed the fanservice aspects of the first season then you should absolutely check this sequel as the fanservice doesn’t disappoint.  Still, it should be noted that Maken-Ki! Two is a definite step down from the first season.  While the anime original stories allow more of the characters to step into the spotlight, the changes of animation studio didn’t translate to a better product.  If I had to quickly describe Maken-Ki! Two, I’d turn to the old adage that, “the more things change, the more they stay the same”.