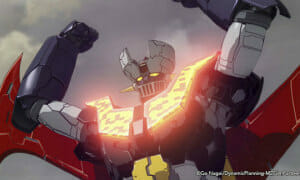 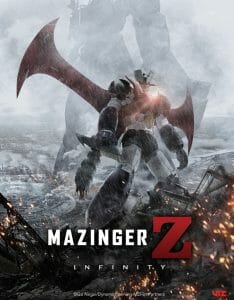 I got to the theater early to pick up my ticket, and then headed out to lunch. While I was dining, my server noticed the poster I picked up at the theater and asked to take a picture of it. I just gave it to him. He explained that he watched the show when he was growing up.

Before the movie started, a pre-roll feature ran which showed interviews with the director, head character designer, and Go Nagai himself. The best of the tidbits came from director Junji Shimizu. When asked what the theme of Mazinger Z Infinity was, he replied that he wants people to enjoy and be entertained by the film. The theme was for us to be happy to have seen it.

I don’t want to spoil too much of the film itself, but it begins with a bang. The fight scenes are its strength, as we get to see the Mazingers face off with a plethora of impressive villains. Having Ichirou Mizuki return to sing the opening was a nice touch as well. 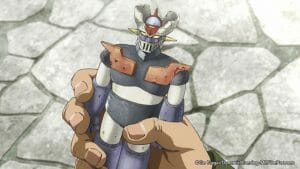 The mix of hand-drawn and computer animation worked surprisingly well. The old school style of the film tickled the senses on both on a visual and nostalgic level.

Many of the enemies were computer animated, which meant that the battles were CG-based. This enabled the team to show off a staggering number of enemies at once, which gave us a nice sense of scale. Throughout the film, I couldn’t help but notice a few notable exceptions to the CG-animation, which were usually played for laughs. 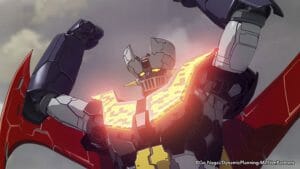 I should note that the mechanical beasts were spectacular. So much so that I would love to face and defeat them in a video game. Between the old-school hand drawn animation for the main characters and backgrounds and the CGI for the enemies and battles, the staff did an exceptional job of capturing the essence of Mazinger Z.

Note: Before the film they played some Mazinger Z facts. One in particular applies here:

This is surreal, seeing not just Mazinger on the big screen in America, but having SRW mentioned too. pic.twitter.com/BFLyoBWlgp

I’d like to add that Mazinger Z Infinity is a highly accessible movie. After the first few minutes, everything makes sense in the context of the film. Newcomers should have no trouble understanding what’s going on or the relationships between the characters, even with the franchise’s 46-year history. 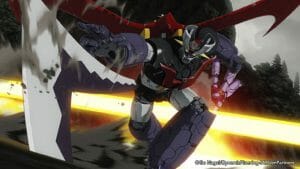 That said,, the movie isn’t without its issues. While the characters have moved forward in time, Koji Kabuto as a scientist (instead of a soldier) is a tough sell. His relationship with Sayaka Yumi (who is now head of the photon lab) is rough for most of the movie. It’s the relationship between Tetsuya Tsurugi and Jun Hono that is the bigger concern, though.

The name Tsurugi is a reference to a double-edged sword (like a Jian). In the manga and anime, Tetsuya was aggressive to both his enemies and his friends. If you hadn’t watched the original series, you wouldn’t know that Tetsuya’s and Jun’s relationship was abusive at times. Tetsuya strikes Jun on multiple occasions. 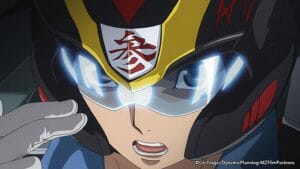 In the film, they are married with a child on the way. Still, there is a flashback sequence in the movie where you see Tetsuya immediately after he has struck Jun. While I can respect them being honest about the character, during the screening I attended when that image popped on screen, another member of the audience yelled out “oh shit!”

We aren’t in the 1970s anymore. Our stories are going to have to evolve.

On the plus side, the relationship between Sayaka and her father (who is now Prime Minister) is handled very well throughout the film. 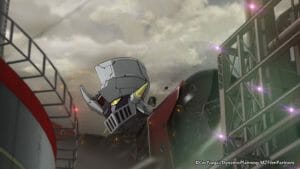 There are a few things I can’t talk about without giving away spoilers. While being as vague as possible, there is a brilliant reveal about the nature of the multiverse as it applies to LISA. Kudos to the writers for that.

The rest of the stuff about the multiverse is gobbledygook, save for “Tesseract Problem” as presented by the use of photon energy. In short, an energy source that powerful can have massive side effects, and may attract unwanted attention. The characters in the Mazinger Z universe are aware of said problem, and it comes up in a press conference. That impressed me.

The real question about a Mazinger Z movie is this: Does it capture the feel and enjoyment of the original? Mazinger Z: Infinity does. From the artistic style, to the fight scenes, to the climax against Dr. Hell, this is a true Mazinger Z film through and through. You can tell that many of the people involved in the film were fans of it growing up, as they threw in both enemies and weapons that were pretty deep cuts. In short, the director succeeded in his goal.