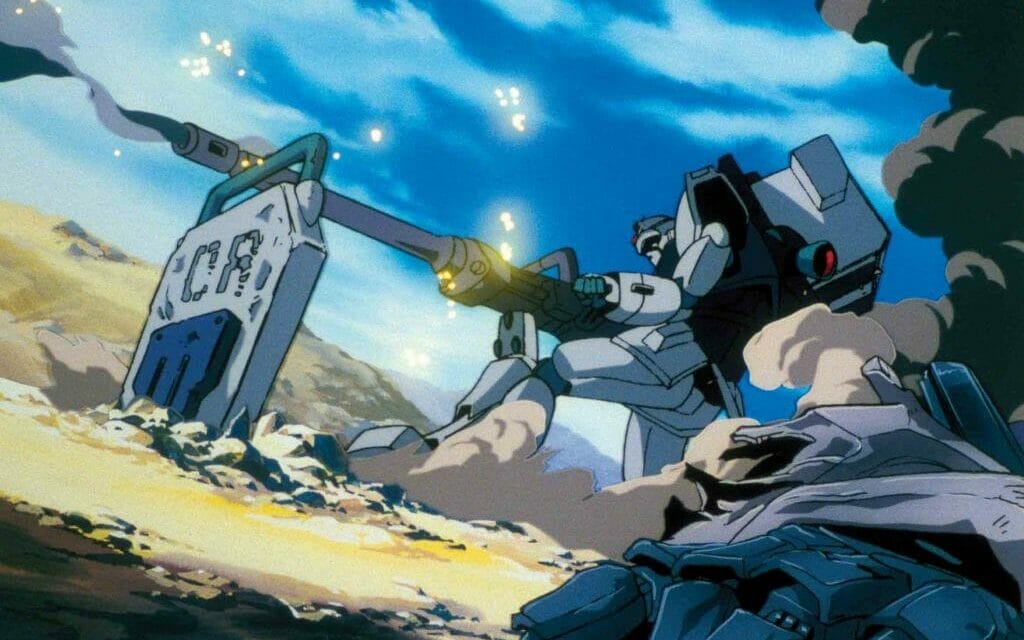 Note: This review may contain spoilers, reader discretion advised. Due to the release of 08th MS Team containing both the OVA series and Miller’s Report this review will contain will reviews for both. 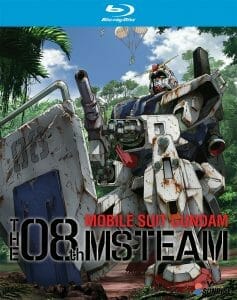 As the One Year War rages on, the Federation has began to mass produce the Gundam for its military forces. One team tasked with using these new Gundams is the 08th MS Team, led by Ensign Shiro Amada.  In the jungles of Southeast Asia, Federation and the Zeon forces find themselves locked in a brutal ground war to control the jungles.

As the flames of battle burn, the Zeon forces continue their development  of a secret weapon. With it, they hope to tip the balance of the war in their favor. Can Shiro and the 08th team save the Federation from crushing defeat?

By the mid-‘90s, Victory Gundam had concluded, and Sunrise had basically put the Universal Century to bed. Instead, the franchise began  focusing on alternate universes, which surfaced in the two shows that aired since Victory Gundam: Mobile Fighter G Gundam and New Mobile Report Gundam Wing. At the same time,  the upcoming After War Gundam X was slated to hit the airwaves by Spring 1996.. And, though the alternate universes held the focus of this era’s Gundam TV projects, it was time to revisit the Universal Century once more. Mobile Suit Gundam: 08th MS Team was  the last Universal Century OVA to hit store shelves until 2004, when MS Igloo made its debut. Is this twelve-episode OVA worth a watch? Yes! 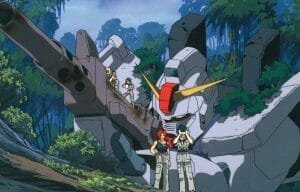 Similar to the two previous OVA releases, 08th MS Team puts the focus on a smaller cast of characters, instead of the entire One Year War. The conflict is still present, though it serves more as a backdrop for the settings of the OVA than the main driver of the plot. This allows the title to focus on a smaller cast, and deal with the characters’ emotions in a more intimate and personal manner.

Take the titular team, for example. Shiro never hides  his feelings in a situation. He also doesn’t lose the optimism, even when the situation is starting to go against him. He even remains hopeful as when he is deemed a traitor by the Federation. His views change as the war progresses, of course. He become more disgusted with the combat and hostilities, but he never loses his optimism.

Karen and Sanders, meanwhile, both deal with traumatic events in their respective pasts. Karen lost her husband in the war, and drove her previous commander to be institutionalized.Sanders, meanwhile,deals with losing every team he has been a part of, and not wanting his current comrades to suffer the same fate. He even as goes as far as to request a transfer to another team in the middle of a mission. Shiro, through his own actions, manages to convince, nay prove the two  that they shouldn’t lose hope so quickly. Then there’s Michel and Eledore, who view Shiro not only as their commanding officer, but as someone to look up to. 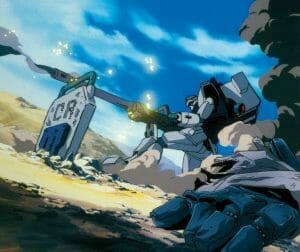 The underlying theme of emotions plays a role in grounding the OVAs, and giving them a more realistic touch. Sure these folks are fighting in a war with giant robots. At the same time, though, The fact that bullets are   flying around doesn’t mean these soldiers simply become unfeeling robots. Take Michel, for example. he is often seen writing to his girlfriend BB, whom he loves, but which we later find out might not harbor the same feelings for him as she once did. This boils over in episode six, where we see him unable to fully focus on his duties, which makes the work harder for the team and this also leads to an outburst against Shiro. This, in turn, helps Shiro realize his own feelings for Aina.

The emotions are not just focused on the Federation, of course. They also play a part on the Zeon front. Ginias, a Zeon scientist, is focused on his “baby,” a Mobile Suit called the Apsalas. He cares for the unit as if it were his own child. He is even willing to kill those on his own side just to see it finished.

For Aina his sister, her reunion with Shiro begins their relationship, and she starts to distance herself from her brother’s controlling manner.

If there any negatives to the story, they would have to rest in the final episode of the OVA. The main story had finished in episode eleven, with episode twelve acting as an epilogue of sorts. The issue in this episode lay  specifically with the NewType children who are given the focus of the episode. Up until this point, NewTypes were not even hinted at, let alone mentioned. To bring them up out of the blue is, for lack of a better word, “jarring.” It’s not a bad episode per se, as it does bring closure to the story. Bringing NewTypes into the picture at this point, though, doesn’t fit the narrative the series was trying to deliver.

Even more than twenty years later, the OVA still looks amazing. (I should note that, though 08th MS Team started in 1996, it didn’t finish until 1999) . As the animation team was free from the typical time constraints of a TV schedule, they were able to work lots of intricate details into the title. This isn’t just true of the Mobile Suits, which allow the viewers to see all manner of details like battle damage or scarring from use. Even landscapes have their own embellishments, such as the dense jungle flora . Even small village homes display the scars and scuffs of battle. It is that kind of attention to detail that really shows the love that was put into the production.

The action scenes are handled with this same steady hand and loving eye The battles don’t have the grand scale that can be seen in some of the other titles in the Gundam franchise, but that doesn’t matter. Despite their smaller scale, conflicts play off as more realistic and visceral, while maintaining that sheer joy and excitement that can be found in the biggest titles.

Also included in this release is the compilation film Miller’s Report. If you watched 08th MS Team as it aired on Toonami, you likely remember seeing this as episode eight on TV instead of the actual OVA. Miller’s Report expands the events of what happened in the eighth episode, along with introducing the titular Alice Miller who only appears in this film. Is this worth watching? I would argue that it is. Miller’s Report is not a complete film, nor does it replace episode eight completely, making both worth a watch. Personally, I suggest watching episode eight before Miller’s Report to get the full experience.

Mobile Suit Gundam The 08th MS Team is easily one of the best titles in the franchise, and one of my personal favorites. Its tightly-written script, realistic characters, and phenomenal production values more than make up for its underwhelming finale . If you only ever had to put one Gundam title in your collection, this should an easy finalist for that distinction. I highly recommend it.