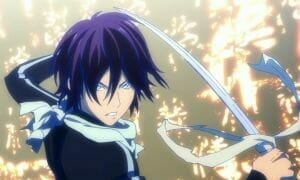 US Distributor: Funimation
Production Studio: Bones
Was this provided by the publisher? Yes
More Info: MyAnimeList Gods and phantoms roam and influence our world, hidden from human eyes. One of those gods is Yato, a deity so minor that no one seems to have heard of him. After a near death experience middle school girl Hiyori develops a problem, in which her soul slips out of her body at seemingly random times. As a side effect, she can now see phantoms and gods, including Yato. The two strike a deal: Yato will help Hiyori get back to normal in exchange for a five yen coin. Until Hiyori can return to normal she tags along with Yato and his new wingman, Yukine, ultimately getting swept up in the trouble that always seems to follow the little known god.

Noragami is a series about relationships and growing up, set against the backdrop of Shintoism. The story starts out as a silly situational comedy , but then it drifts into serious drama as the series progresses. While this transition from lighthearted gags to emotional drama might be a little forced at times, Noragami ultimately manages to balance its comedic and dramatic elements well. It does so by keeping the two separate. When the series wants to build tension or convey danger, no one tries to squeeze in a quick joke. The series knows how to use its soundtrack and color palette to help transition from one tone to another. Once the drama has kicked in, it builds enough tension to keep viewers watching and get invested in the story, especially as characters’ lives are put on the line.

In particular, the show succeeds in conveying the tribulations of growing up in its portrayal of Yukine’s teenage angst and rebellion. In that light, Noragami is a series that teenagers may relate to more than adults, who have already lived beyond the outbursts of youth. That said, the characters remain sympathetic and entertaining, even if their situations don’t reflect your own.

Between the supernatural action, Noragami offers a crash course in shintoism. Shrines, coin offerings and aspects of Japanese mythology are all showcased, if not used as key elements of the story. It is important to note that Noragami is not a faithful adaptation of Japanese mythology, though, and the series does use a lot of creative leeway.

A good example of this can be seen in the way war-god Bishomonten does not reflect the traditional depiction of a man wearing armor and wielding a spear. Instead, the deity is reimagined as a woman in black leather boots and a bikini top, with a slew of weaponry ranging from pistols to oversized swords. While some of these changes might feel silly out of context, Noragami updates its cast to better fit into the modern-day and bustling cityscape the show takes place in. Giving Yato an affinity for tracksuits makes more sense than having him sport some sort of lightweight kimono when it comes to getting his personality across visually.

Noragami is a fun modern fantasy with a lot to offer. But its first season is not self-contained, and leaves more to be desired. Mysteries about Yato’s past and the exact motivations of some characters are purposefully left unexplained for the sake of later seasons. In this light, the final arc feels less like a grand finale, and more like a taste of what’s to come for our protagonists.