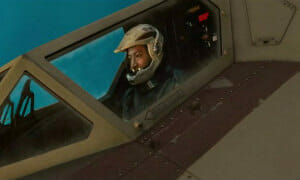 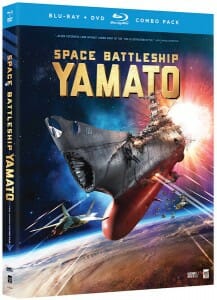 Fair warning, I went into this film blind. I had zero knowledge of the anime it was based on. That said, this approach does have some benefits. It allows me to review the piece without becoming lost deep in the waters of anime nostalgia.  With this in mind, this movie will be reviewed against other sci-fi films, and judged on those merits alone.

Space Battleship Yamato has all the trappings of a cookie-cutter sci-fi flick. A single fighter saves the day, blowing up giant plot device #465 to force his enemy into submission, and so on. The movie shamelessly rips visual cues from western cinema, with the most glaring example being Susumu Kodai with with his robot sidekick, who looks a lot like R2-D2 from Star Wars when it’s installed inside the fighter plane.

Speaking of Kodai, Space Battleship Yamato handles the character with the subtlety of an eighteen-wheeler, carrying chainsaws as it travels through an acid factory. He is told time and time again that he’d be great captain material. By the time he finally accomplishes this astounding feat, there’s nothing exciting about the transition of authority as the audience was made painfully aware that it was going to happen. 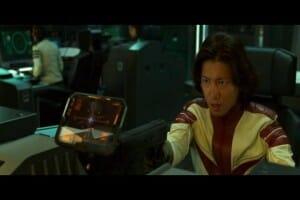 The film’s pacing was near nonexistent from a storytelling standpoint. The heroes get the plans for a new spacecraft from the aliens,only to have the scene jump to the ship’s completion. Apparently, no time passed between these two events, and nothing of interest was worthy of being conveyed to the viewer. The next time issue involves the Yamato’s warp jumping. How much time, if any, was used up in travel? Did everything in the movie take place over a couple of days? Hours?  No context regarding the passage of time is given even after the ship arrives on Earth. If anything, the least that the writers could have done was to spend more effort creating a consistent narrative, to provide a decent timeline and ensure that  the viewers can keep track of everything. 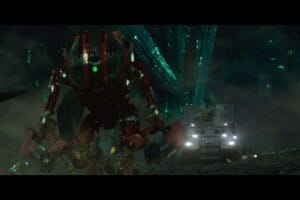 The use of CGI throughout the film was bordering on overkill. Large numbers of scenes are devoted to characters staring off in a random direction, trying (and often failing) to properly react to nonexistent CGI characters, or to events occurring around them. While CGI is a big part of the sci-fi cinema experience, practical effects still need to be in-place to make the film more relatable to the viewer. The explosions that occurring inside the Yamato during combat scenes.  Would have been more effective if the camera actually shook or people tumbled about on the set.

Though Space Battleship Yamato was entertaining, it didn’t exactly break new ground.  There are severe problems with the movie’s pacing and over-reliance on CGI. Personally, I was hoping that the film would tell a more personal tale, focusing on a compelling narrative over the empty spectacle.  However, the film didn’t fail to keep me entertained even with its’ many glaring faults. So if you’re looking for a way to pass some time, grab some popcorn and get set your coordinates to  Space Battleship Yamato.