Happy Sunday everyone, and welcome to a new AniWeekly! As New England gears up for another winter storm, those old sayings start to come to memory. Notably, I’m reminded of a wise old man who one said “If you don’t like the weather in Rhode Island, wait five minutes… then run out to the market to stock up on bread and milk!”

Joking aside, last week, fans across North America welcomed the latest installment of the Sword Art Online franchise into the west, as Sword Art Online the Movie -Ordinal Scale- opened in theaters. Outside of the glitz and glamour of the theater, though, we saw numerous new developments, from a new Mr. Osomatsu season to a Sword Art Online board game. Read on, as we take a journey through all the anime goodness that’s fit to read. 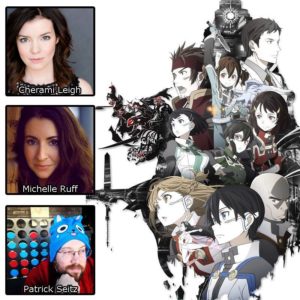 File this under “things that don’t need a Kickstarter.” Japanime Games announced that they will launch a Kickstarter to fund production on a Sword Art Online board game.

The great Eromanga Sensei is making a (semi-) public appearance! The Eromanga Sensei website updated with a pair of promo videos and a visual. Most important, though, is the reveal that the show will hit Japanese TV on April 8.

Yggdrasil awaits one last adventure. Overlord fans have a lot to be happy about right now. During the première screening for compilation film Overlord: The Dark Warrior, an announcement was screened, confirming a second season of the Overlord anime.

Never underestimate the power of cat maids. Sekai Project announced that the Nekopara OVA’s crowdfunding campaign crossed $1 million in contributions. Since the close of the campaign, Sekai Project added 1,380 new contributors, who contributed a collective $86,176 ($62.45 per backer). With the goal broken, a new anime short focusing on Chocola and Vanilla will also be produced.

Farewell from the Absolution, Straw Hat pirates! Toonami announced that they will remove One Piece from their active broadcast lineup. Starting March 25, Tokyo Ghoul will air in the show’s place.

How do you spell “second season?” “O-S-O-M-A-T-S-U”! In a listing for the upcoming Mr. Osomatsu short Osomatsu-san: All Japan Big Invitational Screening Festival in Spring anime short’s Blu-Ray, a special features listing spilled the beans on a possible second season for the show.

Who are we, really? Lauren at Otaku Journalist published an insightful look into anime fandom, both as a community and a population. From the media’s alt-right ties, to those myriad stereotypes, Lauren digs deep and dissects the issues with a deft pen.

Paneling: It’s not just for ’80s rec rooms anymore! Atelier Emily takes a look at a number of works, from Ping Pong to Scum’s Wish, and examines the cinematic technique of “paneling.” Specifically, she looks at how this effects can be used to build emotion for a scene, and hammer home the tone of a cut.

Next, on “When Sequels Attack”! Frog-kun from Fantastic Memes takes a look at Blue Exorcist: Kyoto Saga, and points out where things don’t quite measure up compared to its predecessor.